This is PART I of a story for a whirlwind jaunt, so bear with me.

If you are expecting a guide to all the major tourist destinations in London, you are looking in the wrong place–because 28 hours is the wrong amount of time to even bother with that.

I had an afternoon, an evening, a play, and an early afternoon to fill before my train to Paris.

I came to London with a purpose: to see Punchdrunk’s new play, The Drowned Man. It took place at Temple Studios across the road from Paddington Station, just a five minute walk from where I stayed that night. I booked my AirBNB rental for this location for fear of jetlag, but in the end I only needed a short nap to reinvigorate myself for the play.

After an afternoon that felt like a hazy dream of strolling around the posh neighborhood of Paddington with a friend I hadn’t seen in over six years, I returned to my studio and napped–falling asleep and waking up during the dramatic climax of Temple of Doom definitely put me in the right mood for the evening: disoriented and disturbed.

My experience inside Temple Studios will be told in greater detail next week, the whole play deserves it’s own story apart from the rest of my trip and the rest of my time in London but I cannot talk about this trip without touching on it lightly in some way because it stayed with me and is still something I cannot get out of my head. I’ve been to their play in New York, Sleep No More, and though I’ve already gone to three performances and two holiday parties I plan to attend a show there again this year.

Their productions are typically described as a sort of Choose Your Own Adventure Theater. You receive a plague-type of mask, a brief introduction once you enter the elevator, and then you are released into the play, sometimes in groups, sometimes alone. Your experience is your own choosing, and I wanted to be swept off my feet. I pushed myself into the actors space, stared at them through reflections in mirror, read letters from over their shoulders and they responded in kind.

I’ll go into detail later but to sum up for now: I was kidnapped twice within the play and it was disturbingly beautiful, unforgettable, and intimate.

I left the play fully satisfied but I hungered for more and was already wondering if it would be running long enough to catch it if I return to London in the next year. Discussing their old plays while in the queue for the coat check only made me long the corridors of Temple Studios. I wanted a return ticket back in but even the bar had closed down. Sadly London is not a late night city for your average pub or bar and Temple Studios had not gotten a late night license to stay open any later than midnight.

So I had finished my goal in London, and while I wanted to bask in it I knew I couldn’t waste an afternoon in the city before I hopped across The English Channel. So I planned a trip to one of the destinations I regretted not visiting during my last trip to London: Highgate Cemetery 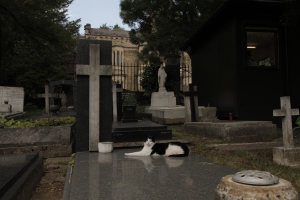 There’s something about these old cemeteries. I had been to the cemeteries of Paris and I’ve spent more than my fair share of time in Resurrection Cemetery in Chicago and while they serve the same function of a resting place for the dead they couldn’t be more different. Perhaps It’s my own personal experiences. I visited these cemeteries as a traveler and reveled in the old beauty of the stone work and sculptures and visited the tombs of famous scientists, writers, philosophers, politicians and poets.

I visited Resurrection as a mourner and later as a daughter dragged through to tombstone of her father by a mother that felt it was her duty to maintain the site and leave flowers and prayers.

But the cemeteries of Europe–or at least the city cemeteries in these two cities in particular–are places of beauty and quiet contemplation. While Paris’s felt like miniature cities within cities, some even below train tracks and tucked into hillsides below tiny apartments, Highgate was just far enough from the city proper to have space for the greenery to grow between the tombstones and in some cases reclaim them as they have reclaimed the bodies of the dead. 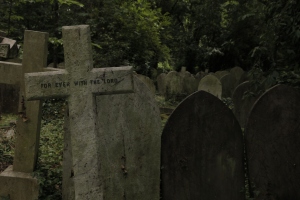 I only had a short time in this forest of the dead but it was magical, and really felt like it was walking into a different world. I strolled through unpaved little paths between rows upon rows of grave sites and just left myself to my thoughts… between clicks of my camera’s shutter.

Jax is a digital video and documentary producer living in the heartland. You can follow her highjinks @Jtoddles

One thought on “28 Hours in London”