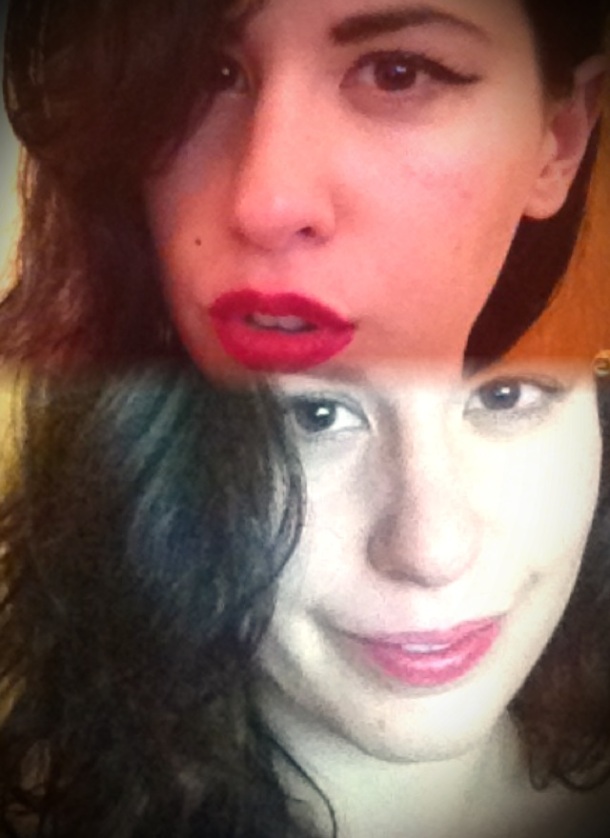 Although I am always the same person, my chances of being called a whore while wearing red lipstick increase greatly. Why? Because I’m expressing myself.

I know. The word whore hurts to hear. It starts with that cold Wh sound and ends with the R, like a snake in the garden.

The word itself comes from Proto-Germanic etymology (should my studies be correct) and means, literally, “one who desires.” While the word has lent itself to many meanings, it wasn’t always technically pejorative, though our usage as a society sure has been.

Instead of discussing why I’d like to re-appropriate the word–which, of course, a part of me wants to do–I want to take back the instances in which I’ve been slut-shamed, harassed and punished for being a Human Being born into a female body.

I DESIRE TAKING MY CLOTHES OFF. I started to dabble in burlesque about two years ago; I started off by taking classes at The New York School of Burlesque. I was always interested in the expression of the naked body as art and canvas; we can use our bodies to tell stories, build confidence and even heal-and burlesque was a form I’d appreciated.I was mostly interested in the idea that I could flick a switch and become object or subject. The crowd cheers for a naked human who is delivering a satirical, funny, archetypal, narrative or simply sensual performance, and those cheers say, “It’s OK. You are accepted.”

But after leaving the club, my eyelashes and glitter still on, my happy Facebook status beaming, “Just stripped out of a sparkly mermaid costume,” I’d get messages from people: “Wow. I didn’t know you did that sort of thing,” “I thought you wrote poetry? I didn’t see you like that. I’m surprised,” and “I didn’t realize you were a stripper.”

At times I’d shoot back, “What’s wrong with being a stripper?” or “I do write poetry, but I also like to dance burlesque.” Other times I’d wonder, silently daggered, am I ruining my reputation?

Case in point: I am acquainted with a small circle of people who I see on a regular basis, and they view sex talk as a sort of faux pas. When my boyfriend and I discuss ‘intimate relations’ publicly, there’s a weird silence.  Now, there is a difference between going totally TMI with your sex and simply talking about sexuality as it relates to the world.

Sure, we’ve been those people, but I’m not talking about that situation. I’ve spoken about my ideas on birth control or pornography or anal sex with or near these people, and they seem to tune-out. Their eyes gloss over and they’ve entered the Offended Zone. Should I have known better? Am I at fault? Should I not make assumptions about others? Of course I shouldn’t. But it’s the after-affect that kills me.They then go and talk about: just what is wrong with Lisa Marie Basile? Does she not care about her body? Is she a slut? Where did she get that mouth?If people could simply ask, “I don’t understand your position. Can you tell me more?” I’d jump on the couch like Tom Cruise on Oprah.

I believe that while sex is an intimate affair, it carries with it the necessary potential to be discussed academically, socioculturally, philosophically and spiritually.  I believe that it is a great, natural and useful thing when it is enjoyed by a consenting group of mature adults who respect one another.

While we take risks when putting our opinions into a public forum (mostly because people-all people-can’t control their love for gossip, learned responses or internalized oppression) I am consistently left wondering why we are so quick to judge and denigrate women based on their sexual choices (i.e, slut shaming) rather than considering them to be a person who makes choices based on feelings and thoughts and information.

If we take a moment to step back and respectfully consider (not necessarily agree with) the human before us, it should do the trick, even if it feels like cognitive dissonance. A little discomfort won’t kill you!
I DESIRE TO LOOK ATTRACTIVE. I have spent years debating: Is it OK to want to look good? I have spent years wondering, Am I doing this for society, for men, for other women or for myself? This is a tricky one, because we hear everything from women who are powerful and secure within themselves don’t need to show off to women who are powerful and secure showcase themselves unapologetically.

Feminism is what we make it for ourselves. There is no right or wrong in most situations. Everything is OK; we can look how we want to look. Period.

What’s that? That’s a steaming pile of victim-blaming. I’m pretty sure that if you leave your house looking interesting, revealing or different, human beings are naturally going to take notice; why shouldn’t they? They have eyes and brains. But one of the cooler parts of being a human is that after years or evolution, the cortex has allowed us to make rational decisions.
One of those decisions is simple: don’t abuse people and don’t make them feel uncomfortable. For some reason, however, women are still the exception.

Physically and verbally inserting YOURSELF into OUR private realities because of something WE are wearing that YOU like or judge or desire? Not OK. Looking good isn’t an invite to stare, ogle, touch, harass, chase or abuse a person.

I recognize that a big part of this discussion is cultural and societal. Beliefs and behaviors and ideas will differ throughout communities.

And while this is to be noted, one fact remains: women throughout the ages and throughout these various communities have been called sluts and whores and prostitutes and concubines for being sexually expressive, interested in male behaviors or jobs or simply being or thinking differently from the accepted norm.

We are ruthlessly punished for looking beautiful, dressing well or being flirtatious (or not flirtatious at all! Oh shit!) either by harassment, out-casting or death. We have been drowned, hung, burned at the stake, stoned, raped and acid-maimed.

One should be able to express themselves and be sexual creatures without worrying for their emotional and physical safety.

Three nights ago, I went to dinner with the Luna Luna staff writers. I wore a low-cut leotard and short skirt. I got on the subway and was stared at intensely. When I asked the man to stop, he leaned over me, stared down my shirt and said, “Freedom of looking.”

I said, “You are making me feel uncomfortable. Would you like this done to your mother or sister or daughter?”

Guess what? He called me a whore.

11 thoughts on “3 Reasons My Desires Make Me A Whore”