She clowns around and fights for social justice. This performer tells stories with puppetry and via a quirky sweetheart jester persona Jack O’Somebody. Marina sat down with Luna Luna to tell us about her experience as a performer and current issues with which she’s currently involved. Never a dull moment in the life of a clown who fights the good fight. 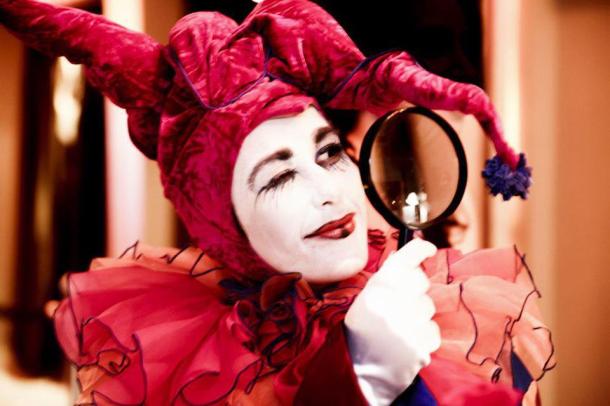 Where did the idea for clowning start?

When I was 16 years old, I saw Slava Polunin’s The Snow Show. Slava Polunin has been called the greatest clown in the world. It was before I ever thought that I would be practicing theater or stage performance myself, let alone the art of clown. Yet Slava, and that show, has been one of my deepest inspirations as an artist.

As I began to study and create performance work, I was drawn more and more to the form of clown. Not the gag-writing clown, but the deep transcendent clown. Jack O’Somebody (my jester or Holy Fool character) was born from the inspiration from the Jack in the Box toy. I’m fascinated by it as it yields wonder and surprise to adults and kids alike, even though we all know what is going to happen, and when. Turn the crank, follow the song, POP! and there is a gasp of wonder and surprise every time in the deep center of the belly, a flutter of the heart. That experience of “magic within the known” is a through line of my work with Jack and of my artistic work as a whole: Jack subverts the assumed.

If you could describe your performing style in one sentence, what would it be?

Haha, I’ve been trying to pin it down, and it is very difficult because I work between a lot of disciplines and genres and am by no means within any classical theatrical tradition.

Lilia Trenkova, a gifted stage-designer and friend with whom I’ve collaborated in the past called me and my work: “avant-garde scene friend and trans-genre project collaborator”

What kind of training have you had?

I was studying fine art, stop motion animation and filmmaking when I became interested in puppetry for the stage. I then somehow was selected for a grant to study puppetry and performative objects in Berlin and France for 6 months in 2010. I say “somehow” because at the time I really didn’t know anything about what the hell I was getting myself into! Berlin was life changing. It was the beginning of me realizing that the true art that fascinates me is performing, and that puppetry and performative objects are some of the mediums that draw me to express that.

I swear by the Margolis Method for Physical Acting. Kari Margolis I believe has developed a deeply profound approach to training the actor’s instrument (body, voice and mind). I can’t recommend it enough. 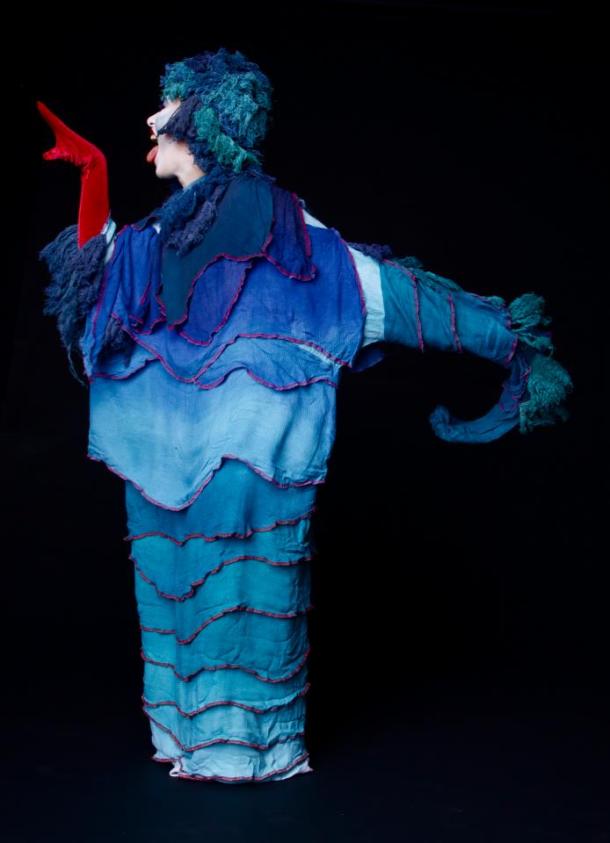 What would you say is the most outrageous performance you’ve ever been a part of?

I think for a friends clown-themed birthday party, I stuck lit candles with icing on various body parts of myself and strangers in various states of nudity as we all sang happy birthday. I had a show where Jack blended ate and spat rose petals at and with the audience. Honestly, I don’t think there is such a thing anymore as an “outrageous” performance. Such limitations had been thrown out the window in the 70’s by the performance world avant-garde. It’s only traditional and classical theater that is limping and lagging behind. What matters is whether It (the performance) works (connects), how and where it touches the audience, and what questions are raised by the work and experiences communicated.

…What about the most fun?

Hmm, I think if I am not present in the highest level of my capacity for life during a show, I’m not doing my job well, a.k.a it isn’t a “successful” ((connected)) performance. Each night you go out to die on stage, so that we can all celebrate life- even if that celebration is of the deepest sorrow. That’s what performance has the power to manifest. And it is incredibly difficult to do. I fail all the time! and I will continue to do so. Fail often. Fail fast. Fail better.

so the short answer is: if I’m not experiencing a deep sense of joy- whether that is joy within a deeply hateful and angry character, or the most loving– then I’m not doing my job!! 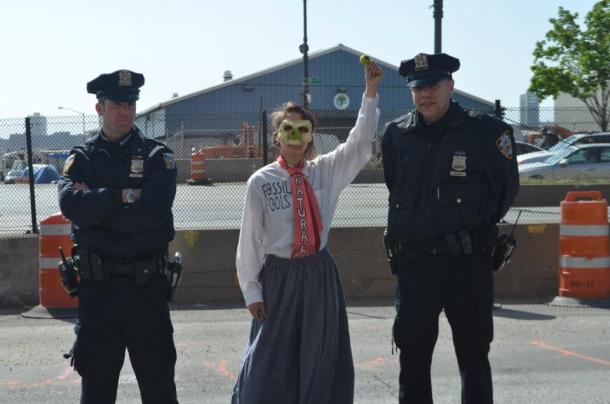 You wear two hats, really: jester by day, activist by night (or maybe that would be the other way around). What are some current issues you’re involved with presently?

Yes, Occupy Wall Street caught me exactly at the moment as I was questioning the role of performance and theater in the socio political world. For two years I became very politically charged and started to call the traditional stage space a false space and that the street is the only place left for true performance.

I have done a lot of performance work through Occupy: as part of the Tax Dodgers: The Best Baseball Team Corporate Money Can Buy, with the Occupy Wall Street Puppetry Guild, anti-fracking actions and performances for Occupy the Pipeline that also gave birth to the political clown troupe The Fossil Fools. Occupy the Pipeline is a completely self-organized and self-mobilized group of committed citizens, activists, artists and performers who care deeply about ecology. Our PSA went viral on upworthy and we have shifted the NYC political dialogue on fossil fuels and “natural” a.k.a fracked gas pipelines- conversation about the Spectra Pipeline became unavoidable during the recent mayoral forums. OtP and Occupy as a whole taught me to never doubt the power of a committed and organized group of people.

My interest in fracking came from a deep and visceral connection to water: I understood in my body how fracking is a violation of our right to life. We are all made of water. A poisoning of a body of water is a poisoning of myself. there is no separation.

I think I had to go into the extreme of calling the stage useless and becoming deeply invested in issues of fracking, corporate greed, relief work with Occupy Sandy after Hurricane Sandy and all of the activism, as it awakened and made me verbally able to express and see the force of division that exists within each and every one of us. This understanding of the divide brought me back to the stage, and performing.

I see the stage as a powerful and sacred place where we as a humanity can experience and awaken ourselves to higher states of consciousness and to be able to unite- to come together in Unity. This is one of the highest of political acts, I think. Creating a piece of work that shifts, opens or reveals a space within that was unknown or possibly forgotten about and that also makes us feel how deeply we are all interconnected- to all beings and matter. My passion for “deep ecology” underlies all of my object and stage work. Vibrant Materialism is a term that was coined by Jane Bennett in her book Vibrant Materialism: a political ecology of things. In it she calls for a reframing of how we view things and objects- to shift from a view of them as dead matter to one where they are understood as “expressive actants” that hold and exert life force. That all material- “living” and “dead”- is Vibrant; actively holding and exerting vibration…

This bridges the illusion of life and death, and of separation and division all together.

OK. I think I have answered the question and then some…

YES! I have been racking my brain trying to find and create the organization or structure that would accomplish this task. And I found it right in my own backyard: I have been a type 1 diabetic for 24 years (I’m 26 now).

I am forming a puppetry company dedicated to helping children and adults alike live with their disease: providing emotional and empathetic support through puppet shows and education, bringing humor to the disease, and forming a sorely missing dialogue and conversation on how we relate to Diabetes. All through puppetry and clown.

Diabetes is at an epidemic growth rate the world over. In April of this year, I had the gut impulse that Diabetes and Climate Change are linked. I googled it, and found that in November 2012 the IDF (International Diabetes Federation) published an in-depth report linking the two. The report links the same systematic problems that are causing climate change to the problems causing the epidemic: the mass-scale agriculture and food systems, the unsustainable exploitation of fossil fuel use. The system is producing disease in all levels of life, and it stems from a fundamentally flawed perception and mental approach: what I and others call “the divide.”

The thinking that we can create systems of use that are completely separate from earth’s own natural system; that chronic illness can be treated as if it is a “thing” separate from the whole person.

And let me tell you: it can’t.

So my own “burden” is actually revealing to be one of my greatest gifts: my Diabetes is providing me a lens to do the work I love- both performance and activism- to address emotional healing and deeper understanding of ecology, interconnection, and Self… and to reach and connect with a lot of people. 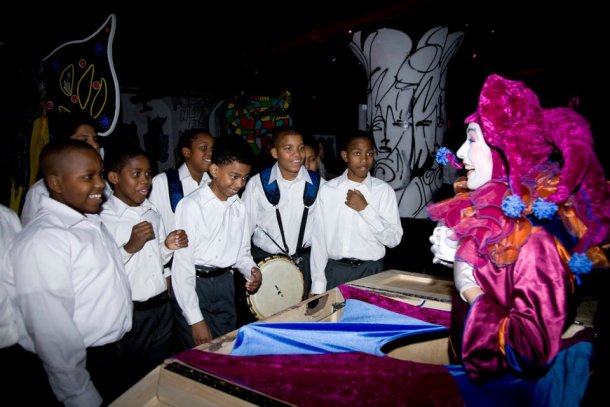 Jack O’Somebody talks with the kids.

What advice would you have for anyone looking to get into the theatre or circus world? Any words of wisdom for new clowns?

You will doubt yourself again and again. The doubt will not serve you. Work through yourself, and if you feel that you cannot not perform, then it is yours and you will find a way.

As for new clowns…. attiring in red nose and makeup does not a clown make! Tune In.

By the way, which venue do you prefer—theatre or circus? And for those of us less informed, what are some advantages and disadvantages to each?

I have no idea as I have never performed (yet) in a proper “circus.”

See more of Marina: check out her portfolio!

Thought the Water Dragon costume was as rad as we did? You can see more of Project Runway designer Fabio Costa’s designs by liking their page on Facebook!

—-
Renée Aubern is a California born, New York bred poet, writer of songs, and kook. Constantly on the move, she documents the world around her in photographs and notebook scribbles. @reneeaubern