And on the last day of Comic Con, the nerd-gods said, “Let them come in droves.” And they did, because the crowd looked larger on this day then any other day of Comic Con. The cosplay decreased—probably because patrons wanted to participate instead of getting stopped every two seconds to take a picture—but the level of commitment stayed sharp amongst line-waiters, autograph-getters, and vendors. 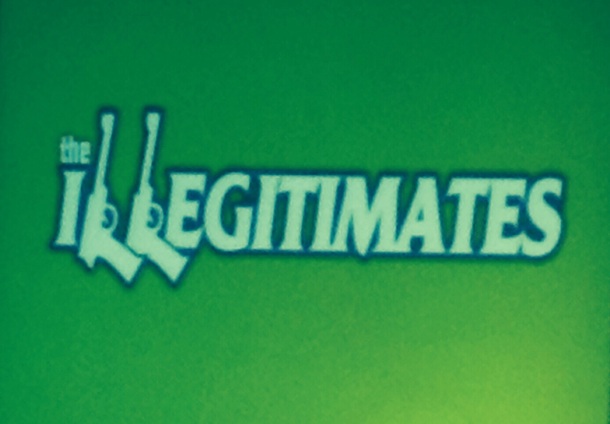 Our first stop was the line for “The Illegitimates” screening and panel with Taran Killem (SNL). The premise of the comic is an homage to a Bond-esque character named Jack Steel that is the head of intel at a major corporation that is killed. So, the corporation is troubled by who is going to take over Steel’s position….but then they remember that he wasn’t very safe when it came to sex. There are five, now teenagers, that can take that place and pick up where their biological father left for them. This is a great idea since there are so many different stories lines that can take place, since each of the kids have one of their father’s great traits…but also one of his weaknesses. Plus, the comic can delve into other topics that other high-action comics can’t—now there can be ass-kicking with some interpersonal connection with this sibling spy team that has never met each other or their father, but now have to fight crime together.

In the main stage, we caught the tail-end of the Defiance panel from the SyFy network. They talked about how important it is for a network to be genuine fans of the genre, and how that—and the fans—can be the lifeline of a show. And at the end, they showed an exclusive trailer for season two. 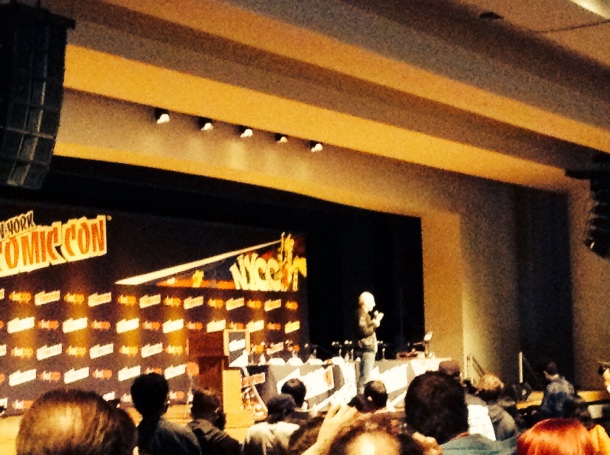 Out of no where, the emcee introduced Patrick Stewart to the audience—having nothing to do with the show but just to promote his Broadway play. He was super nice and took time to talk to the audience about the power of social media when it comes to getting the words about small projects.

The League panel got incredibly rowdy when the emcees issued a dance contest for the 20 select people that granted them access to the front row. But in awesome Comic Con fashion, they all got to be in the front row. Before any of the stars arrived on stage for the Q&A portion of the panel, the audience got to watch the first episode of the fourth season:”Flowers for Taco.” Creators Jeff and Jackie Schaffer joined the cast after the episode finished, and were greeted by thousands of fans—some in cosplay and some in football jersies. Mark Duplass (Pete), Paul Scheer (Andre), Katie Aselton (Jenny), Jon Lajoie (Taco), Stephen Rannazzisi (Kevin), Jason Mantzpukas (Raffi) joined the creators and discussed the group’s social hierarchy, how they have a cast and crew league, less-than-family friendly family scenes, fake sex in front of other cast members, and if parents want to put their kids on the show—it’s not really the cast’s problem if they’re fucked up. As Aselton put, “Parents put their kids on this show..it’s not my problem. My kids are at home, well taken care of. Cash you’re $100 check and have a good day.”

They did give a few hints about the next season. Apparently we’re going to meet Rodney Ruxin’s (Nick Kroll wasn’t able to make it to The Con) sister, Kevin’s nemesis, and Mark Ruffalo is going to be making an appearance.

We eventually made our way to the booths to score some merchandise before we left. We got: a Doctor Who phone case, free tote bags, purple fabric and lace fans, a Celtic chalice, a Lord of the Rings t-shirt, and a free book from the Penguin Publisher booth hilariously called “White Trash Zombie Apocalypse.”

After four days, tons of people, and plenty of cosplay inspiration, we went home totally confident that we made the most of our Comic Con experience.

Until next time, nerds!!!

Laura Delarato is a web producer, writer, social media consultant, video creator, and the brain behind Pass The Cake, Please fashion blog. She has spent a lot of the past 10-years of her life in internships, college, part-time jobs, graduate school, and in front of a computer typing away her next brilliant idea. Her work has appeared in Playgirl Magazine, Kong Magazine, London Glossy Magazine—and at one time CosmoGirl! Magazine. Laura spends a lot of her time typing code to make the internet work, performing improv at The Magnet Theater in NYC, and performing burlesque on every dingy bar stage she can find. Laura likes to be a total badass by participating in body-positive/fat-acceptance activism, crafting pasties, discussing the beauty of pornography, and wearing all the short skirts. Follow her at @lauradelarato