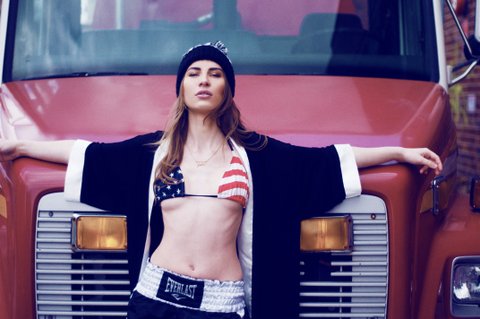 The scent of sweat, blood, victory or defeat swathes the crowd at a legendary (to those in-the-know) Friday Night Throw Down. To those unfamiliar with FNT, it’s  New York’s premiere underground boxing club/party where you’ll find anyone from models to marines getting primal in the ring.

The audience decides the winner unless there’s an undeniable knockout. And the crowd is explosive, drinking and partying, in some secret locale disclosed to invitees the day of the fight (like a gym in Bushwick or a space in the Chinatown mall) and just when you think an overload of testosterone is about the blow the joint apart, into the ring steps Lauren Bonner, the official FNT ring girl.

Bonner, (22) a San Francisco native who left home as a teen to model and pursue an acting career to support herself and help her family, is dressed either in skimpy lingerie, a bikini, paired with leather accessories. Wearing next to nothing, she flaunts her tiny waist and shakes her fierce derriere.

“I have no delusions about what I do. I’m the eye candy,” she tells me on a balmy morning in Brooklyn as the make-up artist works fastidiously to turn this savvy girl-next-door into a man-eating vixen for a photo shoot that exposes Bonner’s street style with plenty curves ahead.

As ring girl, her job is to hold up round cards, rev up the crowd; get people excited for the next round and provide a much needed dose of sex appeal amidst black eyes and broken noses.

“I’m getting up there because I want to be a part of something that’s gritty and real, taking us back to old school New York City.” You know, when Williamsburg was filled with artists, not condos. 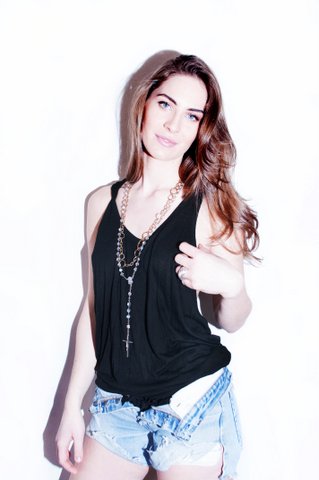 Bonner, who has modeled forever, has also appeared in commercials, short indie films and has been an extra in everything under the sun, was discovered on Facebook by one of the regular FNT boxers.

“He sent me a message like, “‘Yo, girl you got that cake!’ I talked it over with my mom and she encouraged me to do it, saying it was a really great opportunity.”

For those of you who might be thinking, an opportunity for what? Being ogled by drunken dudes? — think again.

“People may slut shame me,” Bonner begins, “but honesty how is what I’m doing any different than the half-naked supermodels on the cover of Victoria’s Secret?”

To critics who say she’s being exploited, I’d argue that the fact Bonner owns her experience defies the stereotype. “I’m a person, like anyone else,” she tells me, and like anyone, she has a past that has led her to a life less ordinary.

“Starting out, my whole goal was to take care of myself first, and my mom and sister second. My dad passed away when I was 15 from a drug overdose and my mom had it hard. It wasn’t easy, but she always made sure there was food on the table and a roof over our heads.

My mom never partied and always put me and my sister first. I’d love to give back to her because that woman shouldn’t have to work another day in her life.” Of course everyone has a story, but the point is the organizers of FNT see Bonner as a person, not a prop.

“The guy who runs it gives me respect,” she says, adding that she’s part of the boy’s club in the warm-up room shooting the shit with the boxers before the fights start. “If they start in with the ‘hey honey,’ routine, I’ll give it right back.

Also, I’m not going home with any of them and they know that.” She’s even known to get physical if a fighter gets “touchy.”  “I’m boss,” she tells me. The same rules apply to audience members who try to cop a feel. “I’ve smacked a guy in the face for touching me before; this is my chance to be a bad ass.” And like she said before, she’s got a part in all this.

For New Yorkers who remember what it’s like to be a part of something organic and visceral, before bros and model wannabes infiltrated Manhattan’s club scene, Friday Night Throw Downs might just be the only real party left in the city, which is why it remains underground.

As such, the crowd is diverse, ranging from, Bonner tells me, “Guys from the South Bronx to preps, hipsters, cool chicks, stylists, and intelligentsia,” recalling the days of Studio 54. “We want to do something different, not just throw the same bullshit parties every week.” It’s the diversity, the rush of adrenaline from witnessing modern-day gladiators that make this an experience more than a party. 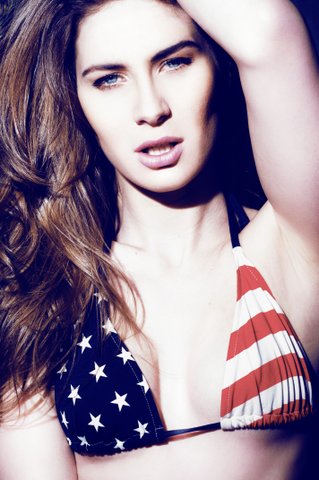 And just as Studio 54 had Bianca Jagger as its reigning disco queen, FNT has Lauren Bonner. So what makes her get on stage on those off days? “I just do it! Once the crowd starts screaming, it’s like no other feeling.” Used to being propositioned by men and women alike, Bonner refuses all offers and stays loyal to her boyfriend.

“At first he didn’t know how he’d feel about seeing me in the ring in my underwear, but I handled myself well and when we went home and talked about it things were all good. He respected me for doing my job.” And he better; after all, this is a woman who carries brass knuckles in her purse.

When I ask her if she has anything to add, she smiles coyly and says, “God, I’ve talked about it; I’ve already broken the first rule.”