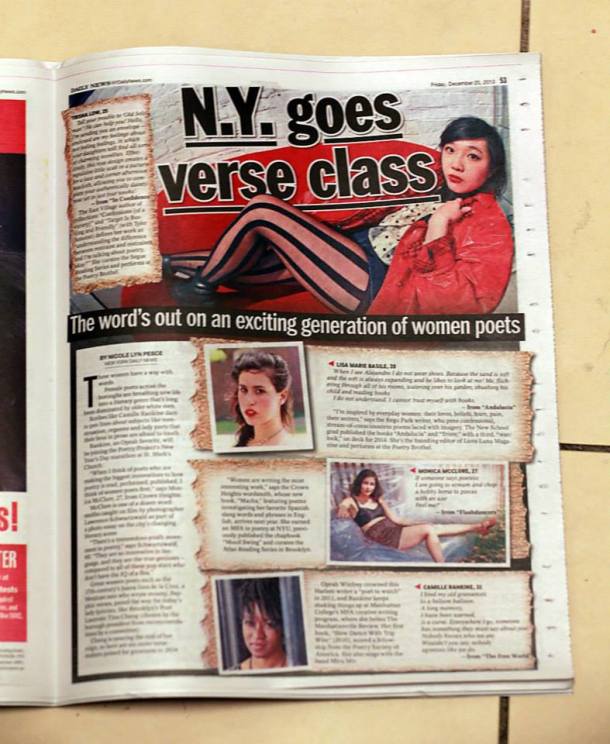 Editor’s note: The editor of Luna Luna is featured in this NY Daily News spread. While many of the comments around the article were supportive and excited, there were many still that asked why the poets showed skin, why they wore makeup, why their poetry “needed” sex appeal. However, many people reacted against these shaming comments, like poet Kelli Russell Agadon. The editor decided to publish the below piece, as it pertains to shaming as part of the bigger picture.

Growing up in the fundamentalist church, I learned early on that my female body belonged not to me but to everyone else.

Before we’d even grown into our bodies, before we even knew quite what adults around us were talking about, we girls learned that it was our responsibility to help the men and boys around us resist sin.

We could help our Christian brothers, we were told, by making sure we didn’t wear clothes that were too tight, too low, to high, too shiny, too too, as though we could control men’s thoughts by the cuts of our clothes. We were asked to think twice before we so much as picked a piece of lint from our sweaters, just in case a passing male might notice our hands near the general regions of our nascent chests.

Incongruously, not a few of us were made to grow our hair long at this same time, whether the style appealed to us or not. We were taught that our hair was our “crowning glory,” and the more of it, the better—the more attractive we’d be to those Christian brothers we were trying to help by walking around with lint on our shirts. I remember my father huffing at the television, disgusted by the sight of then-

Attorney General Janet Reno, saying “she needs to grow some hair.” This wasn’t the first time, nor would it be the last time, that I heard that a woman’s power, skill, position, or expertise was not enough to make her a real woman.

We girls learned from the likes of Pat Robertson, the way that girls today learn from hipster pastor Mark Driscoll, that men cheat on their wives because the women they’ve pledged devotion to aren’t making enough of an effort remain attractive.

Women who don’t appeal to the male eye are forgetting their role as bodies. Weight gain? Lines on the face? Shifting gravity? Dereliction of duty. The female body is always at the heart of the problem.

Men wanted us to be pure and non-threatening, but also unbearably and inescapably desirable. We were set up to fail, we young girls. Whatever we did, we would be wrong, and we would be subject to policing by the men in our culture.

It’s easy to dismiss this kind of body-shaming as an outgrowth of the fundamentalist world. Those behaviors, that shaming, those mixed messages about what a woman should be—that’s just the bizarre behavior of a fringe culture, right?

I wish it were true that in the wider world, we didn’t subject women to this kind of noise, this distraction from women’s talent and skill. I especially wish it were true of the literary world, a community of artist who are, presumably, working toward a common goal.

But last week, when the New York Daily News published a rather innocuous feature on up-and-coming women poets in New York, some elements of the poetry world came out in force to make sure the women in the piece were duly shamed for the quantity of skin shown in their publicity pictures.

Monica McClure is shown sporting a cropped top, one of the most prominent fashion trends of this past summer. Camille Rankine wore a loose-fitting tank tucked into a pair of jeans. Trisha Low rocked tights with stripes on them. Somehow, these garment choices led to a barrage of social media snark about the poets’ states of undress, then to charges of using sex to sell art, and to questions about why poetry can’t be about the quality of the work instead of about the appearance of the woman.

Let’s set aside the fact that the Daily News feature, puff piece though it is, publishes excerpts from these women’s poems and mentions the poets’ professional credentials, reading series, forthcoming work, and performances alongside their pictures, leaving readers no basis on which to complain that skin trumped verse in this article.

What truly pains me about the backlash against these poets is not so much the groundlessness of other writers’ anger at them; poets slamming other poets for achieving a rare moment in the publicity sun is rarely anything other than professional envy.

What truly hurts me is that women are still set up to fail by a culture that believes it both owns women and has the right to shame and blame women for existing in bodies.

A woman poet can’t wear a tank top on a hot summer day in New York without being accused of being undressed any more than I could pluck lint off my sweater as a middle-school girl. Our hair will always be too short or too long for someone’s moral code.

Our hemlines will never be high or low enough to suit anyone’s policing. What hurts me is that, to the wider world, we aren’t women poets, just poets in blameful bodies.

Kelly Davio is a poet and teacher in the Seattle area. She holds an MFA in Poetry from Northwest Institute of Literary Arts and works as an instructor of English as a Second Language. She is the former Managing Editor for The Los Angeles Review and current Associate Poetry Editor for Fifth Wednesday Journal. She is also a book reviewer for  Women’s Review of Books. Her debut collection, Burn This House, is available from Red Hen Press and from Amazon, Barnes And Nobel, Powell’s, or your local book retailer.